For some unit operation models, you can write all outputs explicitly as functions of the inputs. This is however not always the case. If you cannot write your unit operation calculations explicitly, or if it is not convenient to do so, you can use the Excel solver to solve the model equations.

Setting up the solver

First make sure the Solver Add-In is selected and active: 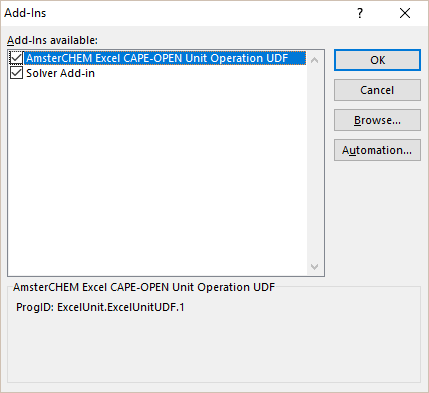 Set up your calculations in such a way that you can formulate the model equations so that the Excel solver can solve them. This requires creation of a target cell for which Excel needs to find inputs so that value of the target cell is at a minimum, maximum or specified values. If solving requires more than one target cell to be equal to a value, you can add constraint cells to the solver. Test that the solver works by setting up the solver manually, and running it.

For more information on how to use the Excel solver Add-In, consult the Excel documentation.

You can specify multiple solver models to be solved during unit operation calculation, so if the problem to be solved can be split up in sequential sub-problems, attempt to do so.

All steps below can be performed manually, or you can click the 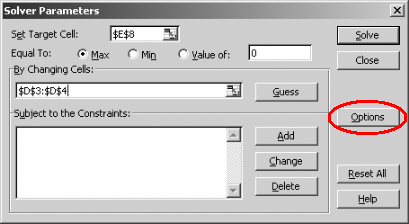 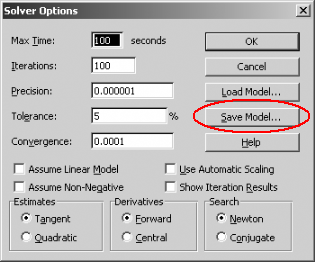 In the options dialog, click on Save model. Your selection will be expanded so that it is large enough to save the model:

Hit OK to save the model. Exit the solver. 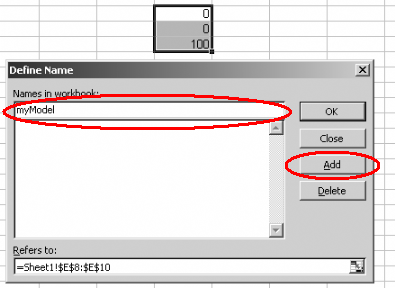 Enter a name for your solver model and click Add.

You may run into situations where you want a different initial guess. For example, you could calculate an initial guess from a simplified model that is easier to solve. If you specify formulas in the cells that are solved for, these formulas will be overwritten by the solver.

It is important that the dependencies on the current sheet are local references (this influences the way Excel copies values). So rather than calculations!A1, use A1 in your formulas on the calculations sheet.